Home » Showing off for your friends

Showing off for your friends 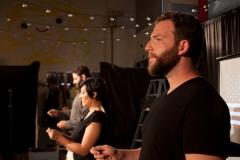 This week we took an opportunity to test out our show on a room full of about 25 willing volunteers. Lots of Fringe Shows have a preview somewhere outside the festival - last year "I'm Saving it for Paul" did something really cool and invited any Fringe Volunteer to their show for free. One of the issues with this is getting a venue, lights, a sound system, chairs, etc. but mostly the venue. This year the Fringe staff are encouraging shows to open up their Tech Rehearsal to volunteers, since most shows do a full dress rehearsal during their Tech. When you think about it, this makes the Fringe by far THE MOST affordable way to produce theatre. Period. Normally you are just paying for the seats you're using during the performance, but here they are giving you 3 extra hours in the venue, and an audience to watch your dress rehearsal! I love it.

On Tuesday we set up Pipe and Drape (which I bought instead of rented), chairs, our projector, the sound system, and some lights from my friend Steve Matheny to put on an invite-only run through of the show. Since we were definitely going to have the actors in costume in front of a nice background, I also decided to get Tisse Mallon to take some professional photographs of us doing our thing, and some out in the parking garage for promotional purposes.

The short version of the show is we were using it as a means of Validated Learning. This is a term taken from the philosophy called the Lean Startup. It says you should create a product and put it out there as soon as possible, and you should create iterations of the product, and change something each time, so that you are testing exactly one new idea out on any given day, or with any given release of your product. In this case, we are talking about the way we collect and use audience interaction in our show.

We had gotten some feedback that the show felt scripted, even though it is 100% made up. We do have a structure, and our cast is awesome, and we are going for less goofy / slapstick in the show, so it comes off like it is scripted to some people. Since the performance, we have made some tweaks to the voiceover script and the means of incorporating suggestions into the show.

I'd love to see how Jane Austen Unscripted does it. The show was mentioned by Ken Ingram, another friend of the show, when I was describing to him the challenge of letting people know we were doing an homage to this story, but that it was a different show each time. I really wish I would have thought to call it The 39 Steps Unscripted.