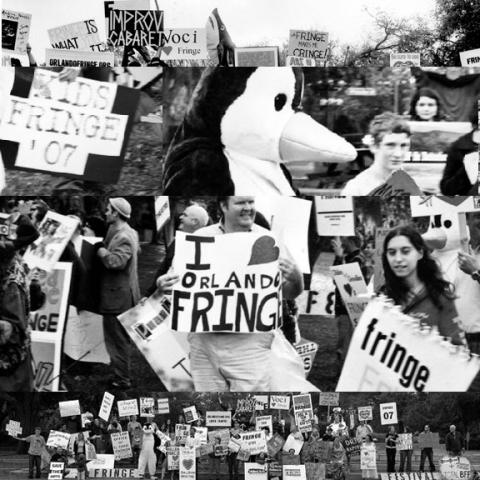 What is the Fringe?
The Orlando International Fringe Theatre Festival is a 14-day-festival that is founded on the concept of offering 100% unjuried, 100% uncensored, 100% accessible theatre, music, dance, art and madness to all types and ages where 100% of the box office ticket sales go directly back to the artists within The Fringe. The Orlando Fringe is the longest running US Fringe festival.

What is The Fringe Mission?
The mission of the Orlando Fringe is to provide an accessible, affordable outlet that draws diverse elements of the community together and inspires creative excellence through the arts.

What is the history of the Fringe?
The history of Fringe Festivals began in Edinburgh, Scotland in 1947. There, a number of performing artists who were not official participants of the Edinburgh International Festival (whose participants are invited by its General Director) decided to produce their own work in empty stores and church basements. Thus, their work was staged literally "on the fringe" of the established festival. The concept was an immediate success and the Fringe soon became as - if not more - popular as the "official" Edinburgh Festival.

Following the example of the Edinburgh Fringe, other Fringe Festivals sprang up in Europe, North America, Australia and Asia in the following decades, many of which follow the true Fringe philosophy - to provide artists with the opportunity to show their work in an uncensored and unjuried environment and to give 100% of ticket sales back to them - to this day. Today, there are more Fringe Festivals in Canada than in any other country.

The Orlando International Fringe Theatre Festival was created in 1992 by Terry Olson (now Director of the Orange County Divison of Arts and Cultural Affairs, Andy Anthony and Rick Kunst) At first, the festival was held in downtown Orlando, with most venues being created in empty storefronts specifically for the festival. This continued until 2004, when the festival was split between downtown Orlando and Loch Haven Park (where Orlando's two biggest theatre complexes, The Orlando REP and The Lowndes Shakespeare Center, are located). The move to Loch Haven proved a success and so, from 2005 on, the festival has been entirely in Loch Haven Park, utilizing The Lowndes Shakespeare Center and Orlando REP as venues. In 2013, Fringe will be expanding once again, to include Orlando’s longest continually running theatre space, Theatre Downtown, and Orlando’s newest theatre hot-spot, The Venue Orlando.

The Orlando Fringe is now the longest running US Fringe and is part of the CAFF (Canadian Association of Fringe Festivals) circuit, which allows Fringe artists to tour many different Fringe Festivals throughout North America and which requires all of its festivals to follow the original Fringe philosophy (100% unjuried, 100% uncensored, 100% accessible for artists and audiences alike, 100% of ticket sales given back to the artists).

Where is it?
The Fringe is held in beautiful Loch Haven Park, just north of downtown Orlando, at Princeton St. and Mills Ave. The shows are in various theaters at The Lowndes Shakespeare Center, The Orlando REP, Theatre Downtown, The Venue Orlando, The Mennello Museum of American Art, and some outdoor or ad hoc sites; most of the venues are identified by color.

What are the operating hours of the festival?
May 15-28, 2012. Box Office hours on weekdays are 4pm-midnite on weekends 10am-midnite. On Patron’s Pick May 28th-10am-10pm. Orlando Fringe Box offices are located in the lower-lobby of The Lowndes Shakespeare Center and the back lobby of The Orlando REP.

What's the deal with The FRINGE button?
A Fringe button is required to enter ANY Fringe show within ANY venue.
The button costs $9 and is a one time purchase. Button proceeds go to the Fringe. Patrons MUST have Fringe buttons on to enter the venues. If you lose your Fringe Button or leave it at home, sorry…you have to buy another one.

A Fringe button is NOT required for Visual Fringe, KIDS FRINGE or to see shows on our Outdoor Stage.
Fringe buttons cannot be purchased online, ONLY in person at the Fringe Box Office at Lowndes Shakespeare Center, the Box Office located at the Orlando REP, Fringe Merchandise Booths located on the Lawn and inside the upper-lobby of the Lowndes Shakespeare Center during the operating hours of the festival. There are no advance sales for Fringe Buttons.

How do I buy tickets for Fringe shows?

ONLINE:
Go online to www.OrlandoFringe.org -> click on SHOWS -> click on the show you are interested in buying tickets for -> follow the prompts.
AT THE FESTIVAL:
At the festival, you can purchase tickets at the Fringe Festival Box Offices, which are located inside all four main venues. The Fringe Box Office opens at 4pm on weekdays and 10 am on weekends. It closes at midnight.
Please note: There are NO PHONE SALES! Please do not call the Fringe Office, the box offices at the Lowndes Shakespeare Center, or the Orlando Repertory Theatre.
If you are interested in purchasing 10 or more tickets for one show, this will constitute as a group. Please directly contact our Box Office Manager Carla Davis at Carla [at] OrlandoFringe.org.

How much are tickets?
Each performing group determines their own ticket price. The tickets range from Free - $11. There is a $1 ticket surcharge on each ticket purchased that goes to the ticketing system. Credit card fees apply as well. 100% of box office sales go directly to the artists in the show you purchase tickets for. No cut of ticket sales goes to The Fringe.

Are any discounts offered?
Yes. The artists themselves decide if they offer a discount and what kind of discount it is. Discounts apply ONLY when purchasing tickets in person at the Fringe Box Office. If a discount is offered by an arts group it will be $2 off their regular price.

Is there parking?
There is FREE parking (about 500 spaces) within the Loch Haven Park facilities. It is on a first come, first serve basis. There is also a big parking garage across the street at The Science Center. This is a private lot for a fee. There is also limited street parking around the area and additional parking at the Florida Hospital parking Garage. Absolutely NO parking can happen on the grass within the park or within the no parking zones, because your car will be towed. Allow yourself plenty of time to park, get your tickets and get to your venues.

What are the show ratings and what do they mean?
Show ratings are determined by the artists themselves, not The Fringe. Shows are required to list their warnings. No one under 18 will be allowed into a mature show without a parent or legal guardian. Remember, Fringe is uncensored, so please take the warnings associated with mature shows seriously.

How long are the shows?
Artists determine the length of their shows. Times range from 30-90 minutes. Most Fringe shows are 60 minutes long. The times are in the program and online at orlandofringe.org

Are the Fringe venues handicap accessible?
YES. All venues can accommodate for wheelchair needs. Please speak to the venue captain to assist you with early seating.

Is there food at Fringe?
YES. Fringe vendors offer a wide range of food choices from exotic to traditional. Meat lovers and vegetarians alike will find something to tempt their palate!

How do I sign up to volunteer?
Sign up by filling out the form and choosing "Become a Volunteer" from the drop down menu of orlandofringe.org or e-mail our Volunteer Coordinator, Jackie Martinez at volunteer [at] orlandogringe.org or stop by Studio C located inside the Lowndes Shakespeare Center during the festival.