Home » An Early Review! Orlando Weekly on The 39 Steps

An Early Review! Orlando Weekly on The 39 Steps 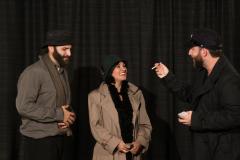 I'm very happy the Fringe was encouraging volunteers and press to join us at our tech rehearsal this year - I believe the extra few days people will have to hear about our show from volunteers, superpass holders and the press in attendance will help our first-time production company earn some more ticket sales.

Our very first review (my first as a producer) comes from Seth Kubersky of the Orlando Weekly. I know they will be publishing some sort of Fringe guide in this week's paper. To get mentioned at all would be awesome.

Read the review on the Orlando Weekly blog.

...a tone that straddles line between serious thriller and madcap farce...

I've heard it said one should count press coverage in inches, not by its content. I'm hoping this will be the first few of dozens of inches of press about the show.

I have decided to repost the whole review for archival purposes:

Since it was first serialized in 1915, John Buchan’s spy novel The 39 Steps has been adapted into radio plays (by Orson Welles), films (by Alfred Hitchcock, twice), and even a Broadway musical. Now, Orlando producer Ryan Price has transformed this indestructible espionage story into an “improvised Cold War spy thriller,” creating at each performance “an original story that no one will see again.”

The basic outline of the plot remains the same. The setting is 1962, the era of Kennedy vs. Kruschev, when world peace hung in the balance. Richard Hannay is an innocent everyman who accidentally becomes embroiled in international intrigue, and must solve the mystery of the “39 Steps” to clear his name of murder. But all the details, from which actor plays the hero to the names of characters and locations, are solicited nightly from each audience.

In a clever technological twist, patrons are encouraged to pull out their smartphones and vote online at various points, with real-time poling data projected behind the performers (You can game the system by submitting multiple votes, but don’t tell anyone I told you). At other junctures, numbered envelopes hanging from an upstage clothesline are randomly opened to reveal a phrase solicited during pre-show, usually resulting in a scene-stopping non sequitur.

At the performance I saw, Christian Cheker was elected to embody the hero Hannay as a meek survey-taker who finds himself with a notebook of missile secrets in his fridge and a corpse on his floor, and he attacked the role with admirable angst. Max Hilend served as the doomed spy Paul Schnitzel (“I won’t make any sexual advances towards you, I promise.”) with Megan Borkes essaying the scarred villain, while bilingual Nadia Garzon bore a bevy of accents in the “wildcard” bit parts. Our audience-directed quest took Hannay from Oregon to the Empire State Building, encountering amorous barflies, a cappella conventionists, and transvestite mentalists along the journey.

Director Rebekah Lane has given the show a tone that straddles line between serious thriller and madcap farce, sometimes seemingly not knowing which side of fence it wants to fall on. The cast demonstrates aptitude at adapting to audience input, but the slow introduction, long scene transitions, and awkward newscaster cut-ins sap their momentum. 39 Steps lacks the snappy humor of sharp short-form comedic improv, or the narrative focus of a scripted drama, but it is an intriguing experiment that should appeal to fans of long-form improvisation and old-school spy novels.

Note: This review is based on a preview performance that the press was invited to attend.