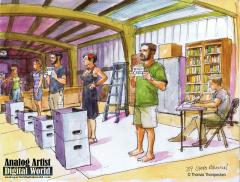 Last week, I got a call from the Festival Producer, Mike, informing me of an available time slot for Fringe. I was excited, but also felt some trepidation. I never planned on trying to fill the Orange venue, which is a massive 320 seat theatre. This would require a little planning. I asked Mike if I could sleep on it. Rewind to one week earlier, I had bumped into a friend, who guest starred in our show last year, Katie Thayer. Katie is a writer and director, and we discussed some of the shows we wished we could produce. One idea I had at the spur of the moment was an improv show where all the suggestions are "Missed Connections" posts from Craigslist. At the time, I was thinking if we got a venue, it might be one of the smaller ones, and a SciFi show might do just fine. Back to the present (in story time), I found myself thinking it would be hard enough explaining parallel universes in a short elevator pitch. I would need to dig into the repertoire. I called a few friends, running by them the idea of a Craigslist-themed improv show. I got good results. I then put an ad on Facebook seeking an Assistant Director, which is critical to my process. When I have an idea, I have to vocalize it, and discuss it with another person. Telling someone makes it real. The next morning, a good friend with lots of technical theatre background, Jamie Woods, called to offer her services as the Assistant Director. I had received some very impressive resumes in my email, but having an existing relationship with Jamie meant we would have some shorthand, and less "getting to know you" time. If I had the extra 3 months, I might have been able to consider forming a new working relationship, but I see no need with Jamie. She's experienced and competent, and fun to be around too. By the time I called Mike back to accept the festival slot, so much had already transpired. by the following Monday, Katie and I finalized the format for the show (at least well enough to start rehearsals). I also have run show titles and descriptions past a half-dozen people, gone on a program ad photo shoot, had a very fruitful pre-production meeting with Jamie, come up with a tentative rehearsal schedule, come up with a plan for my full-page ad, and so much more. All in one week's time. It was almost exactly this same time one week ago when I was asking Mike if I could give him my answer in the morning. Last but not least, auditions are planned for tomorrow night. Over the weekend was the "Unified Fringe Audition" where some 60-80 performers gave short monologues and songs for as many as 12 Fringe Shows. From that list of emails, I contacted people who caught my attention, as well as those with improv experience, preferably both. At this time, I may have as many as 30 people showing up to my own audition, which is simply overwhelming! Finding a good venue for that has been something to chew on, and I'm sure the audition itself will be a bite and a half. At the same time, we're so near the beginning of the race now. This community absolutely astounds me.

Meeting people is hard. Meeting sane people is harder. Meeting sane people on Craigslist is nearly impossible! Join us for an improvised adventure into dating, modern romance, and missed connections. Come see us, and who knows, maybe you'll be someone's missed connection… Your suggestions fuel the scenes. From the people who brought you 2013’s improvised version of The 39 Steps. In this show, we'll play some improv games and have some fun. Part of our show will also be a short original play inspired by your suggestions and the insane things people do on Craigslist.